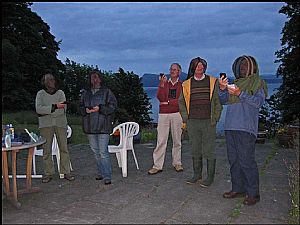 Bat detector training for the three car-based teams, which subsequently covered all of Sleat's roads to listen for bat calls and then record their positions.

Bat awareness was raised within the community and following the successful survey a new bat species was discovered, brown long-eared bat has been added to the much more common pipistrelle.